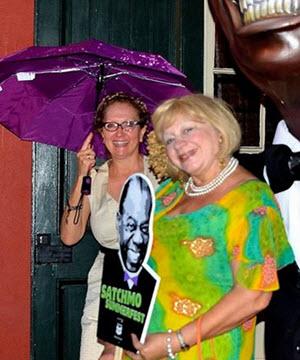 After a very relaxing, brief sojourn to Destin with my brother, Lorenzo Bergen and my darling dog, Duchess Chiquita Bergen, I was ready to enjoy the festivities that included the always-fun American Cancer Society 's announcement of the 2015 Belles & Beaus at The Shops at Canal Place.

This year's honorees are individuals who have made significant contributions in the fight against cancer and represent survivors, volunteers and community members. Allison Shapiro andCarla Adams were the Patron Party Chairs. https://www.facebook.com/media/set/?set=a.10152859946775870.1073742490.581200869&type=1&l=3155adf753

The next day, it time to attend the annual, elegant 14th Annual Summer Cure - Chef Wine Dinner benefitting Susan G. Komen New Orleans at the Windsor Court Hotel which was delicious. The five chefs that participated did an outstanding job and they were Chef Nathan Richard of Kingfish Kitchen and Cocktails; Chef de Cuisine Jeff Bouillion of Galatoire's 33 Bar and Steak; Chef Kristen Essig- Meauxbar; Chef of Cuisine Daniel Causgrove - The Grill Room of the Windsor Court who prepared the Entrée; and Executive Pastry Chef Maggie Scales of the Link Restaurant Group.https://www.facebook.com/media/set/?set=a.10152861485390870.1073742491.581200869&type=1&l=71d4afcd23

The next day, after catching up with my work at Casell-Bergen Gallery, I attended the benefit reception for Help Free an Angel at Bellocq in the Hotel Modern. It was fun and I learned about the wonderful work that the organization is doing for our students. Its mission is to serve parents of children with disabilities due to natural causes, accidental causes, or gun violence, with an emphasis on single parents, by providing the necessary resources and tools in order for their children to participate and function in our society.

The keynote speaker was former Plaquemines Parish President Billy Nungesser, a candidate for Lieutenant Governor and a humanitarian who saved the lives of people and animals trapped during the Katrina flooding. Johana Maison, Executive Director of Help Free an Angel, did an excellent job in coordinating the event.

Darlings, before I share all the fun activities that will be taking place this upcoming week, I wanted to share the sad news that one of my darling friends, Lee Horvitz, who was at my June Round Table Luncheon passing out his TravelHost magazine, passed away last Thursday. Lee was a freelance writer, playwright, director, critic, screenwriter and screenwriting instructor who moved to New Orleans from Ohio in 2003 and quickly fit into the city’s flourishing literary scene. In addition to TravelHost magazine, of which he was serving as editor, he had also written for Arthur Hardy’s Mardi Gras Guide, Scat magazine and several other local publications.

Lee will be missed by all of us who enjoyed him as a human being, a fellow journalist and a great friend. I am posting the link to the obituary that Alan Smason, publisher of the Crescent City Jewish News, posted Monday morning. Thank you very much, Alan, for the diligence and hard work you put into this wonderful tribute. Here is the link:  http://www.crescentcityjewishnews.com/scriptwriting-coach-…/.

Satchmo SummerFest will kick-off on July 30 with a fundraiser to benefit FQFI. A special screening of the 1956 classic, High Society, will take place at Le Petit Théâtre du Vieux Carré, one of the oldest community theatres in the country. Starring Louis Armstrong, Bing Crosby, Frank Sinatra, and Grace Kelly, the film – the last one Grace Kelly made before marrying Prince Rainier of Monaco – follows the story of a musician vying for his ex-wife's affections. High Society was nominated for two Oscars, including Best Song, for Cole Porter's "True Love."

Click here for tickets to the film or to purchase combo tickets that include the Opening Night Reception at the Omni Royal Orleans immediately following the screening!

For tickets to the Opening Night Reception only, click here.

The reception will take place from 8-10 p.m. on Thursday, July 30 at the historic Omni Royal Orleans, the official hotel of Satchmo SummerFest. For complete schedule visit  http://fqfi.org/satchmo/schedule/stage

Before the opening of the Satchmo Summer Fest, at Wednesday at the Point,  talented Amanda Shaw will close the season. And, during Thursday at Twilight, July 30, swinging jazz singer Banu Gibson will perform songs of the 1920s, '30s, and '40s.

Tulane Summer Lyric Theatre is presenting its final production, “Hello Dolly,” from July 30-August 2. The show, with music and lyrics by Jerry Herman, and a book by Michael Stewart, opened on Broadway in 1964 and won 10 Tony Awards, including best musical. Songs include "Before the Parade Passes By," "It Only Takes a Moment," and the title tune, which was made famous by New Orleans-born trumpeter Louis Armstrong. Satchmo went on to perform the number in the Oscar-winning film adaptation of 1969, which starred Barbra Streisand. The show, coincidentally, is the same weekend as the annual SatchmoFest.

Sponsored by Whitney Bank, White Linen Night, is free and open to the public. In the closed-off 300 to 600 blocks of Julia Street, stages are set up for live entertainment featuring some of New Orleans' top bands. In addition, there are conveniently situated kiosks where food and beverages from some of New Orleans' top restaurants and bars are sold. Complimentary hand-held fans given out by the galleries will help keep you cool on what is expected to be a typically warm summer evening. During the hours of 6:00 to 9:00 p.m. the art galleries on or adjacent to Julia Street will also open their doors to art aficionados and casual strollers alike.

Following on the heels of their production of “Peter Pan,” the Broadway Musical, Rivertown Theaters for the Performing Arts will continue their commitment to providing opportunities and productions to showcase and develop the talents of budding local thespians with a delightful performance of “Disney’s Peter Pan, Jr.” by the participants in their company’s Summer Theatre Camp July 31–August 2 on the main stage.

Based on the Disney film and J.M. Barrie's enchanting play, “Disney's Peter Pan Jr.” is a modern version of the timeless tale about a boy who wouldn't grow up! Wendy Darling loves to tell stories to her brothers, Michael and John. But when her father announces she must move out of the nursery, Peter Pan comes to visit the children and whisks them away to Never Land. Their adventure introduces them to the Lost Boys, Mermaids, Indians, and even the infamous pirate, Captain Hook! Audiences of all ages will enjoy such Disney classics such as “Following the Leader,” “You Can Fly,” “The Second Star to the Right” and “Yo Ho Ho, A Pirate's Life for Me.” Running time is 60 minutes.

Directed by Joel and Paige Rainey, the show will feature young performers from around the metropolitan New Orleans area. “Flying By Foy” will be returning to train the cast members who will be flying as part of their roles of Peter Pan, and the Darling children.

Rivertown Theaters for the Performing Arts is located at 325 Minor St. in the heart of Rivertown in Kenner (parallel to Williams Blvd.). There is plenty of parking on the streets around the theater.

And, for some lighthearted, fun entertainment, come to the New Orleans premiere opening night of “The Book of Liz” at The Theatre at St. Claude (formerly the Marigny Theatre). The opening is on Thursday, July 30 at 8 p.m. and the theatre is on the corner of St. Claude Avenue and Marigny Street. Written by David and Amy Sedaris, this is the humorous story of a nun who leaves her order to find her way in the secular world and instead encounters all these quirky characters in the restaurant where she works.

Jim Fitzmorris is the director. Margeaux Fanning stars in the title role, with support from Kathryn Talbot, Kyle Daigrepont and Joel Derby. I read a preview for the show and it sounds like it’s going to be a lot of fun and laughs. You can read more about it in this Thursday’s New Orleans Advocate.

Benefit reception for Help Free an Angel at Bellocq.

24 Likes
Phil Stern -Louis Armstrong and Billie Holiday from the movie New Orleans - available at Casell-Bergen Gallery at 1305 Decatur St for $20
Visit http://casellbergengallery.com/ for all of you art needs.

Complimentary beer, wine & soft drinks
There will be a marketing table for members to display their marketing materials & business cards.

Stroll through The Quarter while enjoying complimentary tastings and chatting with our celebrity bartenders.

Start your cocktail journey at any of the participating bars to receive your Sake Hop card. The card will be validated at each visited location. Turn in your completed card and you will be entered into a drawing to win two VIP tickets to New Orleans Sushi Fest presented by Royal Honda AND a two-night stay at one of New Orleans Hotel Collection's hotels.

To be eligible to win, completed cards must be turned into VIVE! Bar (located in the Hotel Le Marais - 717 Conti St.) by 7:45pm - drawing will be held at 8pm. Additionally, "Sake Hoppers" can vote for their favorite bartender, who will be named the Sake Hop Champion and receive a prize.

The event is free to attend and open to the public.
Summer Lyric Theatre at Tulane University

Closing out the season is "Hello, Dolly," July 30-Aug. 2. The show, with music and lyrics by Jerry Herman, and a book by Michael Stewart, opened on Broadway in 1964 and won 10 Tony Awards, including best musical. The story is an adaptation of Thornton Wilder's "The Matchmaker," and is set in turn-of-the-century New York, where brassy widow Dolly Gallagher Levi (played originally by Carol Channing) meddles in the love lives of several couples, and, in the process, finds a new man of her own. Songs include "Before the Parade Passes By," "It Only Takes a Moment," and the title tune, which was made famous by New Orleans-born trumpeter Louis Armstrong. Armstrong went on to perform the number in the Oscar-winning film adaptation of 1969, which starred Barbra Streisand.

July  30
Yappy Hour in the Courtyard at Rare Form, to benefit the Louisiana SPCA will be held at 437 Esplanade Ave. at Frenchmen St. from 4-8 p.m. every Thursday. Stop in for dinner, or just enjoy some craft cocktails and listen to relaxing live music with your friendly four-legged friend.  Fresh water and treats will be provided for pups while owners enjoy $1 off all craft cocktails.  Don't forget, when you mention "Yappy Hour," 15% of the proceeds from your outing go to benefit the Louisiana SPCA!  Visit
for more info.

A superior and swinging jazz singer, Gibson focuses on songs of the 1920s, '30s, and '40s.Pavilion of the Two Sisters, New Orleans Botanical Garden, City Park at 6 p.m,

on Saturday, August 1, 2015 from 10 AM- 12 PM will introduce attendees to the diversity of New Orleans' historic architecture and neighborhoods - from the old-world craftsmanship of the Vieux Carré, to the French Colonial architecture along Bayou St. John, to the glamour of St. Charles Avenue.This tour will travel through the Vieux Carré, Esplanade Ridge, Mid-City, Carrollton and the Garden District.

More in this category: « Mann speaks "frankly" about Vitter’s US Senate letters Demos slap Vitter, Jindal’s team pokes RNC; How to debate Trump? »
back to top