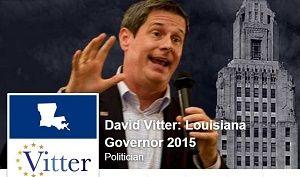 Today’s Political shorts:
The Louisiana Democratic Party slaps Vitter’s ethics; Jindal’s team criticizes the RNC’s debate process; Mike Huckabee wants to know if he went too far with his Holocaust comment; What are the GOP candidates positions on climate change? How should the GOP candidates handle Donald Trump?

Despite having posted obscene fund-raising totals thanks to his support among the super-wealthy special interest crowd, Sen. David Vitter continues to lean on “campaign welfare” wherever possible, building his cynical, hands-off campaign for governor at the expense of Louisiana taxpayers and families. Thanks to the efforts of his high-priced legal team and their elite corporate backers, Vitter was able to force Louisiana taxpayers tocough up nearly $70,000 toward one of his shadowy “political action committees.” In a page ripped from Gov. Bobby Jindal’s partisan playbook, Vitter is petulantly defending the right of faceless corporate paymasters to buy and sell elections in Louisiana and across the country.

And, just like Bobby Jindal’s flailing campaign, Vitter and his operatives continue to pick and choose what parts of the law apply to them. Even with the blank check special interests have given him to try and buy the governor’s race, Vitter is almost literally nickel-and-diming the taxpayers, looking for flimsy excuses to have his constituents foot the bill for his endless campaign mailings.

“With all the obscene amounts of money his campaign has to throw around, and with the infamy of his name recognition all over the media, David Vitter is taking advantage of Louisiana taxpayers to pay the lawyers and special interest groups supporting his campaign,” said Stephen Handwerk, executive director of the Louisiana Democratic Party. “There is something perverse about trying to buy an election, then conniving to force the voters to help pick up your tab.”

The Republican Party’s leaders vowed to take control of the debate process, but they’re fighting the last war—and inviting trouble. The RNC seems to know that it has created a mess, and last week laughably attempted to reverse course by advancing a bizarre argument that it is forbidden by Federal Election Commission rules from influencing the debate process. That line was instantly dismissed by legal experts, but it’s worth noting the logic: The people who vowed to take control of the debate process now say they are legally forbidden from doing so. Go figure.
Here’s a wild and controversial idea: Trust the voters. Let candidates debate whenever and wherever they want. Don’t try to control the process from Washington. Let freedom ring.
Mr. Anderson is a Republican media consultant and former political director at the Republican National Committee (1995-97). Presidential candidate Gov. Bobby Jindal is one of his current clients.

Friend,
As you know, my comments referencing Iran’s threats to invoke a holocaust against Israel have caused Hillary Clinton and President Obama to attack me directly.
Do you believe I went too far with my comments? Go to my website and vote here:
http://www.mikehuckabee.com/iranpoll
Frankly, your opinion matters more to me than what anyone in the media says. So please let me know with a simple click where you stand.
Thanks,
Mike Huckabee