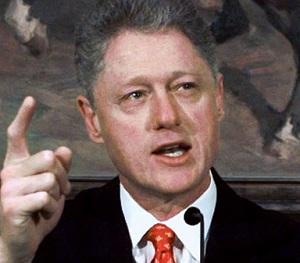 Hillary Clinton is in a free fall right now. Her poll numbers are dropping, her socialist rival is drawing larger crowds and a new book being released this week is reminding Americans about her very unusual marriage.

In Ron Kessler’s new book, The First Family Detail: Secret Service Agents Reveal the Hidden Lives of Presidents; it was revealed that former President Bill Clinton is once again cheating on his wife. This time his mistress is a buxom blonde who brings cookies to the secret service agents, according to Kessler. He also claims that Hillary treats agents with “contempt.” In fact, he says that “she’s so abusive to her agents that being assigned to her detail is considered a form of punishment."

Concerning Hillary’s marriage to Bill, Kessler contends that “It’s a total fake, like everything else about Hillary. It’s just a big show and a scam.” Will Americans want this freak show back in the White House? During the Bill Clinton years, it was a constant stream of scandals and investigations. While he survived impeachment and finished his second term, he certainly diminished the reputation of the presidency. In fact, Bill Clinton was so tarnished that Al Gore practically refused to campaign with him in the 2000 presidential race.

After Hillary saved Bill’s presidency by standing by his side during the Monica Lewinsky, many pundits expected her to coast to the White House. She initially won a New York Senate seat and then joined the 2008 race for President. Her coronation was disrupted by an unknown Senator from Illinois who stole all of Hillary’s thunder. Battling to become the nation’s first African American president, Barack Obama trumped Hillary’s quest to become the first woman president.

In that campaign, she was also exposed as a poor campaigner and a boring speaker who did not excite voters. After her disastrous turn as Secretary of State, Hillary is once again hoping to ride a feminist wave into the White House. The problem is that her political skills have not improved and her current campaign is beset with numerous serious problems.

From the “Clinton Cash” controversy to the Benghazi investigation, Hillary has been on the defensive since the beginning of the race. However, new revelations disclosed this week threaten to pose an even more serious problem for Clinton. Fox News has revealed that classified information from a variety of intelligence agencies was located on Clinton’s private email server.

It is quite possible that Hillary Clinton mishandled classified information and committed a crime. According to former prosecutor Rudy Giuliani, Clinton should be “under investigation for five different crimes right now.”

Of course, despite the evidence, the Obama Justice Department has shown no interest in prosecuting Clinton. Giuliani believes it is “outrageous” that Attorney General Loretta Lynch has refused to investigate Hillary. This outrage should surprise no one because in this administration politics always come first and justice runs a poor second.

More in this category: « Will New Orleans Saints get the Junior revenge as Redskins nab Galette Dardenne's request that Vitter repay state for Super PAC fees will fall on deaf ears »
back to top