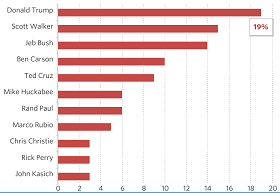 he days are growing shorter for Louisiana Gov. Bobby Jindal’s chances to be on the Fox News debate stage in Cleveland Thursday night along with the first tier of Republican candidates. The Wall Street Journal-NBC News poll today shows that the governor is sitting at 1% while Donald Trump leads with 19%.

Following Trump in the poll was Wisconsin Gov. Scott Walker with 15 and Jeb Bush with 14% of the tally.

The real competition for the 10th and last spot, at least according to this polls, are between New Jersey Gov. Chris Christie; Texas Gov. Rick Perry and Ohio Gov. John Kasich.  All three of those candidates received 3% of the vote in this poll.

The margin of error was plus or minus 6.17 percentage points.

More in this category: « Dardenne's request that Vitter repay state for Super PAC fees will fall on deaf ears New Orleans ranked 45th in Best Large City To Live In says WalletHub »
back to top