Stephone Anthony can make his mark with New Orleans Saints 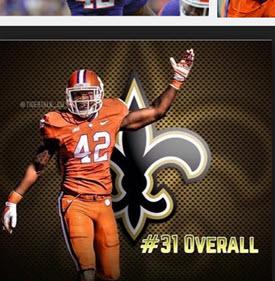 To my thinking, there is one player in Saints camp who is in the best position to make a major difference in the team’s fortunes this season. The player is rookie first round pick Stephone Anthony of Clemson. Don’t misunderstand what I am saying. I didn’t say the position was the most important on the team. That obviously is the quarterback position, which was adequately filled last season and, presumably, will again this year by perennial Pro Bowler Drew Brees. I am saying that the inside linebacker position is the position that has the biggest need for an upgrade, and Anthony just might be the man to do it.

God knows, the team needs a run stopper who also has the speed to stick with a running back or tight end in a pass route. Based on his first few days of camp, Anthony at least looks the part, and to defensive coordinator Rob Ryan, he sounds the part. "The thing you gotta love about him is you heard him out there. He hits," Ryan said of the first-round draft pick, who has lined up with the starting defense for the first practices of camp. "He hits people, he knocks people backwards," Ryan told ESPN.com. "And we are in that business when he's playing middle linebacker."

Anthony has been with the starters while veteran Dannell Ellerbe is nursing an injury, and he's been taking full advantage. The 6-foot-3, 245-pounder from Clemson particularly stood out during a 9-on-7 run drill, repeatedly popping running backs near the line of scrimmage. "I think he's done a phenomenal job catching on," Ryan said. "He's being coached by Joe [Vitt], so you know he's being coached hard and coached well. And it shows. This guy's not flinching out there. He's in front of the huddle, he's not flinching, he's not taking a step back."

Technically, Anthony is competing for the starting Mike job with veteran David Hawthorne, but Hawthorne spent the past three years as the Saints' starting Will linebacker and slid back over when Ellerbe went out with an undisclosed injury. Anthony could earn a starting job by beating out either one of those guys. If Ryan and his new aide-de-camp Dennis Allen are going to bring the defense up to a competitive level, I believe a strong inside linebacking presence is essential. Think back to the great defenses, and most were anchored by outstanding middle linebackers. Lambert, Steelers. Lewis, Ravens. Butkus and Singletary, Bears. Nitschke, Packers.

Anthony has to take the position before he looks that far ahead, but if he is a starter going into the season, it would at least give the Saints the potential for a long-time inside presence they have not had in twenty years. That is not to discredit Jonathan Vilma, who manned the position during the Super Bowl campaign and was elected to Pro Bowls after the 2009 and 2010 seasons. But Vilma came in the rent-a-player Salary Cap era when a team could go out and buy what they don’t have. When you are talking about inside linebackers with a long-time presence, you have to go back to the years between 1986 and 1994 when Sam Mills was elected to five Pro Bowls and Vaughan Johnson who was elected to four. Mark Fields, who manned the position here between 1995 and 2000, was elected to one Pro Bowl but in 2004 as a member of the Carolina Panthers. Can Anthony take his place among guys like that? To repeat, he has a long way to go, but he is in a perfect position to do it.

Here’s a trivia question for you: Name the three inside/middle linebackers elected to the Saints’ Hall of Fame. We gave you Mills and Johnson, but if you guessed Joe Federspiel of Kentucky, you win a Stephone Anthony jersey.

His new book, "Where the Water Kept Rising," is available at Amazon.com and at local bookstores. And don't forget his website: www.JWMillerSports.com