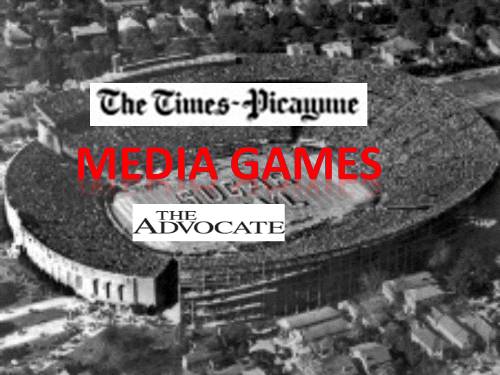 Let the whistle blow and those media games begin.

The New Orleans Times Picayune (NOLA.com) announced today that it would be publishing a Baton Rouge edition (print) and a special web edition for those interested in Baton Rouge news.

The Baton Rouge Advocate who has already publicized that it would be publishing a New Orleans edition of its papers and who now are seeking subscribers in the New Orleans area will be making itself felt in New Orleans, as early as Monday.

According to a press release:

The special announcement will be held at Rock N Bowl for 10:30 am, Monday September 24.

Also today in this growing media battle of print and cyber came the shocker:

In an article today, the Times Picayune announced,

So, how is this playing in the local community?  Are we now seeing a Tulane-LSU type competitive rivalry emerging in media-land South Louisiana?

Here's the take of one observer and community activist, publicist Cheron Brylski, who on Thursday evening posted online

Now, for some of the "big questions" to digest as we watch from the sidelines:

Will Baton Rouge and New Orleans be able to support two paper publications, even if the upcoming Times Picayune-Baton Rouge edition is not a daily?

Will Baton Rouge embrace the "Pic" since some in New Orleans are upset with that paper due to the recent change into an "thrice-weekly"?

Which business leaders and advertisers, in either city, will cross-over to the other side of the field (or the city-paper up or down the Mississippi River) ?

How will this razzle-dazzle play impact other paper and media offerings as the market appears to almost simulatemously expand and convulse, mindlessly?

My half-buck (the cost of the paper) says we will begin to see many player substitutions, free-agent jumpings and even expansions/mergers before anyone can fairly answer one of the above questions.  In the meantime, someone pass me the game program.  It's getting darn hard to tell the players by their numbers.

Entering this ever-evolving media fray comes Tyler Bridges, the former Times Picayune news reporter who among other topics covered the travails of former Klansman and "disgused" Nazi-sympathizer, David Duke. when the Dukester ran for a medley of elective offices, including for U.S. President.  Bridges will now be writing for the Lens, a New Orleans-based web publication.

According to the Lens,

Bridges is a terrific writer who became a daily-read for many of us during one of the most tumulterous and angry periods in recent Louisiana history.

The Rising Tide conference is this Saturday, September 22 at Xavier University  The conference includes a full day of programming and will tackle issues ranging from the changing media landscape, to the commodification of New Orleans culture, to the health of our coast. A second programming track will highlight local entrepreneurial success stories and parenting challenges in New Orleans. Featured speakers include author Lawrence Powell and writer Lolis Eric Elie. Consult the Rising Tide web site for the complete schedule.

Heading up the Rising Tide conference is Mark Mosely, who is a column writer for The Lens and who publishes the blog, yourrighthandthief.com.

The growth of the Rising Tide Conference marks the powerful rise of the blogosphere in this area, especially after Hurricane Katrina.

You will want to say goodbye and thanks to many of the stars of the Times Picayune who will no longer be writing for that publication due to the cutbacks announced by the paper when it announced it would publish three-days-per-week.

Here’s how you can do it.

Attend the fundraiser “Black, White and Red All Over” being held on  Saturday, September 29, 2012 (final Saturday of daily publication of the newspaper)

(final Saturday of daily publication of the newspaper)

featuring experiences and items donated by

More in this category: « Gestapo raid for Kate Middleton’s naked photos turns Closer into a chained duck Mourning news: Ex-New Orleans Times Picayune fans can get Advocates from Baton Rouge »
back to top