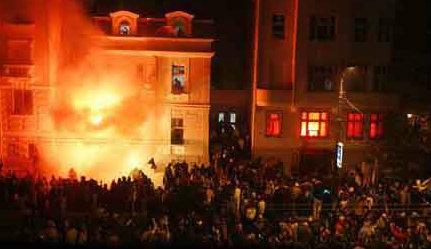 ''we find them (the pictures insulting to muslims) offensive, and we certainly understand why muslims would find these images offensive. anti-muslim images are as unacceptable as anti-semitic images, anti-christian images, or any other religious belief.”

any president who would state those words in a tense moment of diplomacy is a cowardly appeaser sucking up to muslim extremists, right teabag nation? well congratulations, because george w. bush issued that statement in 2006.

that “cowardly appeaser” bush issued those words in response to a danish cartoon that muslims found obscene, and led to riots and demonstrations all over the globe. perhaps you don’t remember? i know gop operatives were hoping we’d forget. our american-grown teahadists driving the gop nut bus are so full of hate that they won’t let decency get in the way of their deranged attempts to demonize the incumbent president. their hysterical lies and attacks on the obama administration over the embassy tragedy smack of desperation, intellectual dishonesty and moral turpitude.

had someone called the president a coward, an appeaser and weak for his statement back in ’06 when bush was in office, neocons would have labeled them unpatriotic and even treacherous. so if the shoe fits today, mitt romney, put it on your foot and stick it in your mouth. it’s a position you’re used to by now.

here’s another set of facts teabaggers wish we’d ignore: the gop’s own pathetic history in recent years when it comes to embassy attacks and violence. they pretend that they would handle the situation so much better, that it never would have happened on their watch, but they lie. in fact, the last republican president presided over no less than seven violent extremist attacks on u.s. embassies.

in other words, they failed to deter a damn thing.

allow me to refresh your memories, america:

teabagger blowhards can now feel free to choke on that irrefutable history. and now that we’ve had our memories refreshed and the truth is revealed, let’s take it a step further. look at the man they want to replace the incumbent with, mitt “believe in ‘half’ of america” romney.

let’s see, during his “statesman trip” a couple of months back, attempting to show how statesman-like he is, romney:
1. insulted our closest ally, great britain, ridiculing their management of the london olympics;

2. insulted palestinians, suggesting that none of them really want peace; and

the only time romney the statesman ever takes his foot out of his mouth is to insert the other foot.

new polls are showing that, thanks to the hate-overkill desperate attacks of the teabagger elites and romney’s own atrocious performance as a candidate, the president has begun to open the largest lead in the race thus far, especially in the battleground states. the romney/koch/superpac cartel has already decided to cut back millions in media spending in michigan and pennsylvania, deciding that those states are lost for good. after all, they didn’t get rich by throwing bad money after bad.

so what’s left for the teabaggers now that their presidential ship is springing leak after leak? more desperate attacks, more lies, more flailing, more deceptions to be sure.

they were so certain that they had the best presidential candidate that money could buy. and here’s the lesson: they were right.

More in this category: « Mourning news: Ex-New Orleans Times Picayune fans can get Advocates from Baton Rouge Country who would be king should learn from latest US, Muslim flareup »
back to top