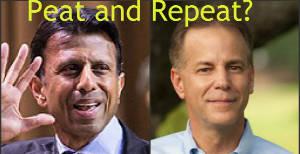 Looks like Louisiana gubernatorial candidate Scott Angelle is going after a certain “conservative” crowd in an effort to peel off potential David Vitter supporters.  It also appears that Angelle, who occasionally tries to distance himself from our “alleged” governor, Bobby Jindal, is now appearing to be his clone.

Which is a logical conclusion if one views Angelle’s recent television spots.

You’re probably familiar with is TV ad called “I’m ready”. In that promo, Angelle first talks about the great job market that we expect to have and how we need technical school and community college graduate so much more than those seeking learning from the more four-year programs.

No problem there.  We have known for years that an associate degree in certain trades will go a lot further than a history or English degree from a university--no matter how prestigious.

Then, in the same commercial, Angelle suddenly points out that everybody should work including those “able-bodied" welfare recipients who are not "pulling the wagon" rather than "riding in it".

No problem there, either.  Except, for, well, haven’t we often heard Angelle’s former boss, Bobby Jindal, use virtually those exact same words?  Certainly we can all agree there are welfare recipients who can work and who refuse to do so.   But since both of them are so prominently raising that point, how about if they back it up with facts, rather than throwing out raw meat?   More so, just the fact that Angelle morphs a 30 second ad about rosy-job ops and alternative education into a worn-out Jindal-phrase about welfare dudes creating wagon-inertia, raises the ultimate question—ok--what are you really trying to tell us?

Angelle then ends the spot by saying “don’t you think it’s time for more pullers, I’m ready, aren’t you?”

Ready for what?  Who the heck is he asking this question?  Those already pulling the cart don’t need to be ready for anything, right?  Oh, unless he’s targeting his message to those sitting in the wagon and he’s urging them to join him and pull? Or just perhaps, he’s telling those potential voters that they can trust him with the Jindal message, that he has his own “conservative bona fides”,  and that he can blast those lazy-shiftless dependents, as well as anybody else running for the mansion.

By the way, if his message is for able-bodied welfare recipients to attend alternative education institutions, get a degree, work and contribute, then surely that message would apply to non-welfare recipients who can go a different career route too.

Unfortunately, he fails to tell us this during and at the end of the ad, so we just must sit and think the obvious and the worse.

Speaking of welfare, I wonder if he agrees with his benefactor, Jindal, that there are corporations who are and who have been receiving “corporate welfare” which has contributed to our budget mess? Remember, that’s what our current governor said last legislative session after helping to sit the same companies on the corporate welfare cart, over the past seven-plus years.

Which brings us to his new commercial focus about “religious freedom”. Surely there are many issues that Angelle could be discussing as he introducing himself to us, other than this one.  I know this is Louisiana, but, this one is simply too obvious.  Just the fact that he isolates this controversial issue, the same one our Presidential hopeful has been promoting, is strong indication that he sees great political mileage in pandering to Jindal’s crowd.

Keep in mind who is reportedly playing a major role in the Angelle campaign, non-other than Jindal’s  highly-paid alter-ego, Timmy Teepel.

Oh, by the way, just like Jindal, Angelle wants us to know that favoring bakers over gays means he is not discriminating because, he, like Jindal are making it clear--there is no room for discrimination in Louisiana.

I know Angelle wants to win and feels he needs to sway the folks who are looking for an alternative to David Vitter.

But, in doing so, he is stoking the flames of concern engulfing those who see an Angelle administration as a Jindal repeat performance.

If this is what his campaign is about, oh brother!

More in this category: « Katrina tried to wash Louisiana away Louisiana organization says ducation gains post-Katrina is better than reported in media »
back to top