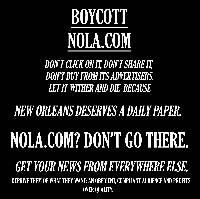 why is the ownership of the some-times-picayune and its bastard child nola.com shafting the people of south louisiana? the answer is simple: because they are greedy and smug and stupid. they’ve already made crystal clear that the letters, and rallies, and vip statements imploring them to reconsider mean less than nothing to them. they’re ignoring us.


the times-picayune management has deserted us and no longer serves its public, so the public should desert their server.

deprive them of what they want more than anything: an obedient, compliant online audience and online profits.

if you really want to make advance/newhouse publishing atone for needlessly wrecking the some-times-picayune by turning it into half a newspaper, thrice-weekly, here's best way to do it:

boycott nola.com. don't click on it, don't visit it, don't go there, don't share posts from there.

they want to replace the paper with nola.com.

let them know we can live without their vapid, inept website.

get and share your online news from everywhere/anywhere else.

if we all ignore nola.com the way advance/newhouse has ignored us, eventually they’ll need to re-evaluate, and either sell or relent. but they’ve made it clear that they’ll only reconsider if and when their website is reader-less and worthless, like our opinions are to them.

as they continue to force the changes down readers’ throats and their employees out the door, the advance/newhouse cartel have taken the extra step of abusing their power to try to silence some potential critics. gambit has reported online that, included in the pink slips tp employees were handed, the exit packages they received included penalties for those who dared be actual journalists and report what’s really happened at the paper. the owners have reportedly included “non-disparagement” wording in the agreements, apparently compelling their fired staff to keep quiet or jeopardize what money and benefits they’re being tossed to the curb with.

yossarian would laugh; this is indeed a catch 22 moment: “we’re firing you, but you mustn’t say anything bad about us even though you’re gone. just pretend you like us by not saying anything.”

new orleans doesn’t like bullies, never has. and these media carpetbaggers are bullies, ravaging a profitable paper for no good reason.

we, however, are not dependent on these media vultures. in fact, the opposite is true. they need us – to go to their website, to make more money for them, to further degrade the quality of the news coverage we get so they can make even more money. they think we’re sheep.

to make this work, all you have to do is nothing. don’t go to their nola.com, ever. don’t share links to their stories via social media or email. don’t subscribe to their online editions. don’t advertise with them.

they think they’ll ignore the criticism and ultimately have their way. so here’s what’s left for us to do: it’s time to return the favor. ignore nola.com. don’t go there. to get a daily paper for our community, don’t go there.

dear advance/newhouse cartel, to modify your own headline: adapt to dealing with fed up new orleanians, or fade away.

(The opinions expressed above are those of Sid Arroyo's)