The latest polls tell a horrible story for Louisiana Governor Bobby Jindal, the most persistent presidential candidate of them all. According to the Loras College Iowa poll, released today, Jindal is languishing at 1% support in Iowa, tied for 12th place. Thus, Jindal has received no political benefit from his countless trips, speeches and campaign appearances in the Hawkeye state.

It is even worse news for the Governor in the latest national poll released by Public Policy Polling. In this survey, Jindal is at the very bottom, tied for 14th place with less than 1% support. Nationally, Jindal is going nowhere fast despite innumerable appearances on national cable networks over the past few years.

At this point, it is quite clear that Bobby Jindal is not presidential material. While he has political experience, he has very little real world experience. Today, Republican primary voters are looking for a non-politician to lead the party back to power. Voters are tired of politicians like Bobby Jindal who promise hope and change, but deliver broken promises.

Jindal is the Republican version of President Obama, a politician delivering strong rhetoric, but poor results. Today, Louisiana is in the midst of another budget crisis and Jindal is nowhere to be found. In the last legislative session, he appeared on the opening day and then did not reappear until the closing day. In between, Jindal campaign aggressively for President, but offered almost no legislative agenda and allowed legislators to pass a budget based on smoke and mirrors.

In the last legislative session, legislators used an oil price of $62 per barrel for budget planning purposes. This highly inflated figure was based on wishful thinking, not reality, for the price of oil today is hovering around $40 per barrel. With oil and gas revenue comprising a major portion of our state budget, such a faulty prediction created a major hole in our financial projections.

Barely a few months into our current operating budget and the state is already facing a $19 million shortfall in the TOPS college scholarship program and a whopping $336 million hole in the Medicaid budget. According to Louisiana political and legislative watchdog C.B. Forgotston, “Failing to address these daily budget fissures will result in the exponentially increasing the size of the additional taxes, tuition, fees increases and mid-years cuts.”

In the last legislative session, taxes, fees and tuition were increased by the largest amount in state history, using unconstitutional measures that are being challenged in court. According to Forgotston, all of the legislative decisions were “counter-productive” to growing the state’s economy and did not address the real problem facing Louisiana, the “size” of our state government.

For one important area in the state budget, higher education, spending has already been slashed. According to State Treasurer John Kennedy, Louisiana colleges and universities have already been “cut to the bone.”

Today, none of the budget options for Louisiana are very palatable, so very difficult decisions need to be made. The problem is that Louisiana is suffering from absentee leadership, as our Governor if busy campaigning for President.

With poll results showing his presidential campaign in shatters and a state budget nightmare getting worse, it is time for Governor Jindal to come home and finish his term with a semblance of dignity. He needs to try to solve these difficult problems that he helped create, so the next Governor is not dealing with a total financial catastrophe. 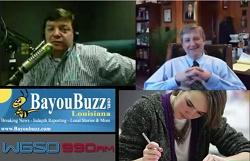 TOPS, Medicaid in Louisiana hitting the bottom, the current Governor Bobby Jindal continuing the high cost of healthcare in Louisiana and pushing the problem off to the next administration—those were some of the topics discussed today in a WGSO radio interview with Treasurer John Kennedy.

More in this category: « Treasurer Kennedy: Medicaid eating Louisiana alive, Jindal pushing problem to next governor Rebelling against Cries for Confederate slogans, mascots changes in Louisiana »
back to top