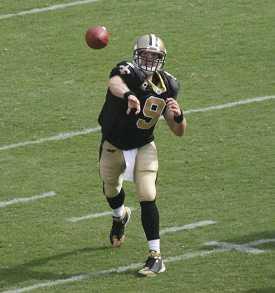 Brace yourselves, boys and girls, because Sunday’s 31-19 loss at Arizona just might be a snapshot of what could be a long Saints’ season. You can’t pin this one on one player or unit. It was a true team effort pushed along by mistakes and lack of execution from a combination of veterans, of whom we expect much, and young players who have been pushed out of the foxhole before they have experienced live fire.

An early, almost comical indication of what lay ahead came in the second period when the Saints trailed 7-3 and Arizona was driving. QB Carson Palmer lofted one into the end zone, the Saints' DB jostled the receiver and the ball fell to the ground. Flags flew, and Referee Walt Anderson announced “three penalties on the play.” Saints’ fans perked up because maybe the obvious pass interference call would be canceled by an offensive infraction. But, no, the first penalty was a defensive hands to the face on the Saints, which was declined. The second was illegal contact, which was also declined, and then the pass interference was confirmed. The Cardinals’ scored their second TD on the next play and went up 14-3.

Overall, the secondary committed five accepted penalties, including three by Delvin Breaux (one pass interference, two holding), one by Damian Swann (facemask) and one by Kyle Wilson (pass interference). But you can’t entirely blame these young guys whose heads were on a swivel all day. Penalties on the secondary come when the quarterback has time to go through his progression of receivers and pick the best option. The Cardinals’ offensive line was so impenetrable that Palmer could have enjoyed a sip of mocha latté before he had to throw the ball. Cameron Jordan came close a few times as did rookie Hau'oli Kikaha, but for most of the day Palmer was untouched.

Offensively, I was encouraged, especially in the first half, by the Saints’ attempts to generate a ground game. Both Mark Ingram and Khiry Robinson ran hard early, but as we have seen so many times in the past, head coach Sean Payton and QB Drew Brees sooner or later abandon the run, leaving us with a weak 54 yards on 20 carries. That left the bulk of the offensive load to Brees, who appeared devoid of any receiver who could get open past the line of scrimmage. The only thing that worked was flares to the running backs, although Brees kept trying to force passes to Marques Colston, who just doesn’t seem to be able to get open consistently any more. I am also getting a bit tired of hearing about the potential of the young receivers.

Potential means you haven’t done it yet, and none of the young receivers stood out with the exception of Brandon Coleman’s catch and stretch for the Saints’ only touchdown. Coleman had at least one key drop, and if he had run harder to block his man, Ingram might have scored on that late screen pass. It’s also time to see Brandin Cooks’ game-breaking ability that we’ve heard so much about. The most consistent receiver during camp was rookie Willie Snead, who had one super catch and run of 63 yards when he finally got the chance. Let him play more, and, yes, I still think the Jimmy Graham trade was necessary.

And while you can take Sean Payton’s track record of rolling sevens to Vegas, I do not agree with his decision to punt the ball at fourth-and-6 from his own seven-yard line with 1:58 left in the game. One note this morning agreed, pointing to a “win probability chart” posted at Pro Football Reference, which said the decision to punt decreased the Saints' odds for winning by 23.5 percent. I know that figures can lie and liars can figure, but I would far more trust Drew Brees to pick up six yards when he needed it than I would trust a young and battered defense to get the ball back. A couple plays later, it was moot after the game-clinching touchdown run by the Cardinals' David Johnson, through the Saints young and battered defense.

One positive note is that the Saints can take all they learned in Arizona and apply it this week in the home opener against Tampa Bay, which lost their home opener 42-14 to Tennessee. The Bucs should keep the Saints out of last place in the NFC South this season while trying to convince the world that Jameis Winston is an NFL quarterback. The Titans defense, ranked just above the Saints at 27 last year, sacked Winston four times, intercepted him twice and knocked away four passes. I'll bet you Rob Ryan is studying the tape of that game over and over and over again.