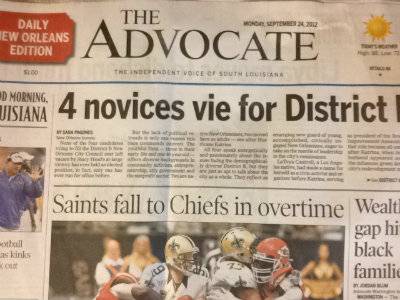 On September 24, 2012, the Baton Rouge Advocate gave birth to the Advocate New Orleans Edition at a news conference at RockNBowl.

The paper, which has been known as the Morning Advocate has moved into New Orleans after the Times Picayune has opted to reduce its paper edition to three times per week in favor of a digital  product.

The Advocate will now become the only daily print newspaper in New Orleans.

The Advocate was announced to the New Orleans media by community business leaders, Greg Rusovich of Greater New Orleans Inc. and Suzanne Mestayer of the Business Council.

The publisher David Manship and its executive editor Carl Redman spoke to the media about the reasons for their entering into the New Orleans market.  Sarah Pagones, formerly of the New Orleans Times Picayune will head up the Advocate New Orleans edition as its burea editor.